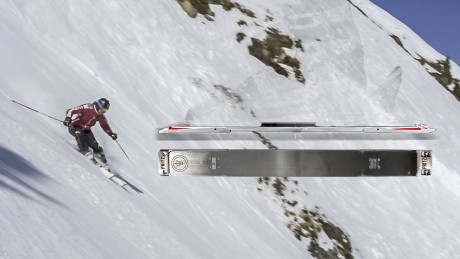 1. Optimal ski vibration and ski bending
The vibration behaviour and the bending line of the ski are, compared to existing systems, least disadvantageously affected. The ski can fully develop its positive characteristics.
2. Constant contact pressure of ski bindings
The contact pressure as well as the release value of the ski bindings remain unaffected by positive and negative ski bendings.
3. Less vibration and shock transmission onto the racer
Considerably less vibrations and shocks are transmitted onto the racer. This fact enables a significant higher speed. The strain on knees and back is effectively reduced.
4. Smaller expenditure of force
The innovative ski plate enables a more efficient and economical skiing style.

1. Ski racing
Tests conducted by top World Cup ski racers with absolute identical skis have verified race performance improvements of between 2 and 4 tenth of a second after a race duration of 23 seconds. Every top 20 racer can thus become a winner and every top 10 racer can thus become a serial winner.
2. Hobby skiing
For hobby skiers the features of the new ski plate result in a significantly greater skiing enjoyment and in a considerably higher level of individual skiing proficiency.
The plate helps skiers with health impairments to be able to enjoy longer skiing days with less strain on their joints.

Developed for the joy of skiing, be it as hobby skier on the slopes or as professional racer between the gates.