1981 I worked in the USA for the Firm Safari Outfitter Limited. I was charged with all kinds of work on various manufactures from well-known producers (from Purdy to Perazzi). Because of the fact that my boss Gery Hermann also was rifleman at the US-american clay pigeon-championship, I was also charged with the optimizing of his sporting guns. One day , Gery visited me and showed me a gun called Capriness . He told me that this gun has a very fast firing-time. The fast firing-time is for the rifleman especially in the area of sports of very high significance. On closer view at this gun, I noticed that there is no acknowledged shelling for this construction in Europe. I had the idea to construe a straight appearing straight-hammer in a break-open-rifle. Over the years I drawed a draft , which lied in front of me at my workbench. 1994 I was visited by a customer that wished to purchase a hand-made gun in exclusive workmanship on the occasion of his 50Th birthday in three years. After extensive conversations , I recommended him to manufacture the wished “side by side (over&under construction is possible) double rifle” (Bergstutzen) with the mechanics of H.&H.. In the same moment , the customer saw my draft at my workbench and wanted to know what this was. I explained that on my state of knowledge this construction must be that best one that DOES exist now. In the same exhalation Dr. Röhrs ordered a “side by side double rifle” with the above mentioned “Bowkastensystem”. Initially I manufactured a few prototypes. The first gun could be deliveres at Christmas 1997 – to to great pleasure of my customer. The gun does not only shoot perfectly, but was mechanically and concerning the design right what he wanted. Spurred of this success , I developed a totally new break-open rifle. From 1998 to 2000 I worked exclusively at this gun, the Pritz-systems gun Nr. 1. From 2000 up to 2001 I perfected the construction to a switching barrels with mechanics that can be taken out. I construed a totally new mechanical system. It is a handcocking-mechanics (“Kugelspannsystem”) with a box that can be taken out ( in the box there is the complete cocking-mechanics) The closure has a few characteristic features, but one striking particularity: the barrel-lomp are closed at “area-pressure” (“Flächendruck”) ( not like other constructions at sure-face) Therefore the closure can be cumcumbered to a higher degree. A customer got to the heart of the closure and called it “ safe-closure”. A new concept had been born: The possibility of changing barrels. It is possible to change the barrels from the caliber .22 Hornet up to .375H.&H. resp. 9,5X60R Pritz with one handle bar. I developed a “achsiale” assembly for the telescopic sight (at the moment of the shot no “Kippmomentkräfte” at the telescopic sight) The form of the shaft is classical and optimally inlaid at the shooting. The design of the gun is absolutely new and dignified. 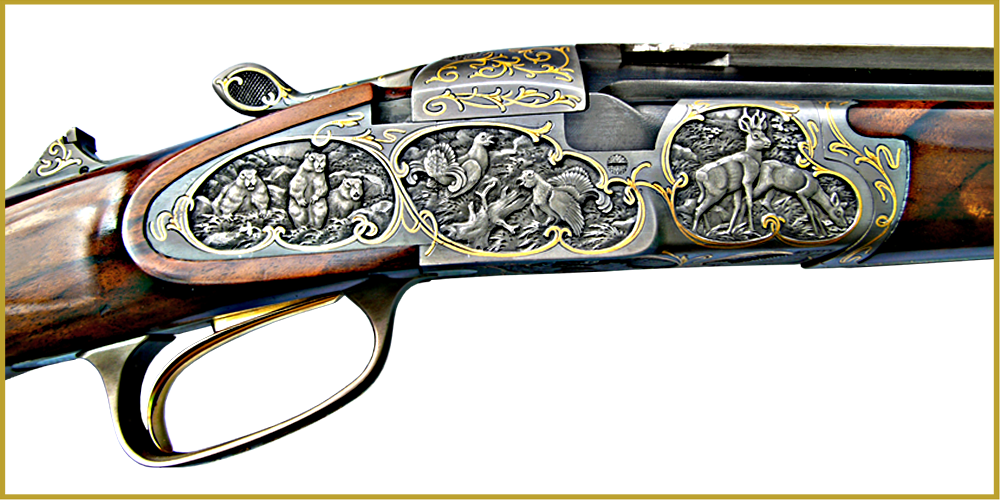 Workmanship of steel: two different qualities of steel are to be chosen. The best material for the sporting shooter is the before working hardened material Böhler steel. A case hardening steel (“Einsatzstahl”) is used in connection with guns, which receive a worthy gravure The weight of the gun with steel: ca. 3,4 kg

Light-metal workmanship out of high-tensile tool-aluminium. Weight of the gun: ca. 2,6 kg The exact measures(overall length etc.) depend on the customer wishes (Length of the barrel, measures of the shaft etc.) Gun with a shaft-length of 37 cm and a barrel-length of 61 cm =overall length of 100 cm