1988 a customer requested me to construe a hammer-gun. The customer has watched me working for a few times and was in possesion of seven Ferlacher hunting guns. He never knew which persons did the work on his guns and therefore he wanted a gun, which was construed exclusively by myself. At first I rejected the order becauce I wasn’t fully convinced from the technic of the hammer-sidelock. I thought that there were some room for improvements. The customer often visited me in my workshop. After a half year I had an idea how the construction of a hammer-sidelock can be improved and how more security can be reached. I designed a sample , which functioned at the first go perfectly. After another half year I filed a patent application for my invention of the safety hammer- sidelock. 1991 a patent was granted with seven “under-claims” with the number 392841. I manufactured a gun for the customer in the caliber .22Hornet &6,5X57R. A customer wish was fulfilled and furthermore a new identity was formed in the area of hunting guns. The gun being an optimum connection of elegant , classical , but nevertheless new design and best handy workmanship , was very well received by my customers and at fairs.

1. In this gun, the key and the shaft are made of one piece. ( no visible toplever-screw any more!)
2. The bottom side of the case was closed. ( no lomp visible)
3. The safety-hammer-sidelock is anchored in the case.
4. The lock plate is made of one massive piece ; of which the sockets and the “Wiederlager” for the main-spring are made too Advantage: There are no bores through the lock plate. There are no tacks in the lock. The mainspring is freely re-binned and is Not hold through a tack. (a predetermined breaking Point less)
5. The “Abzugstange” and the
6. “Fangstange” are put onto the sockets.
7. “Abzugstangen” and “Fangstangenfeder”
8. Forged main-spring
9. The „Studel“ is a plate, which is screwed , but has no cohering , but a supressing function.
10. The nut is through the lock plate and in the “Studel” “wiedergelagert”
11. The “slingshot”(Schleuderl) functions mechanically.
12. The hammer is put on the “Nusswelle” on a “Vierkant” and is fixated with a hammer-screw. The hammer-screw is through a safety screw secured against the untwisting when the wham takes place. Between the hammer and the nut, there is the lock plate. 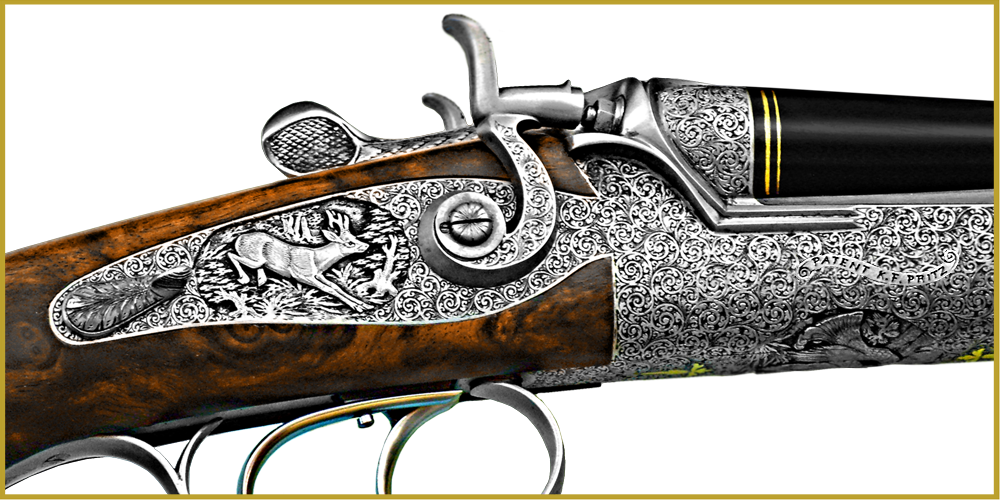 Nevertheless the handling of the hammer-sidelock is very easy: Stretching-Shooting!